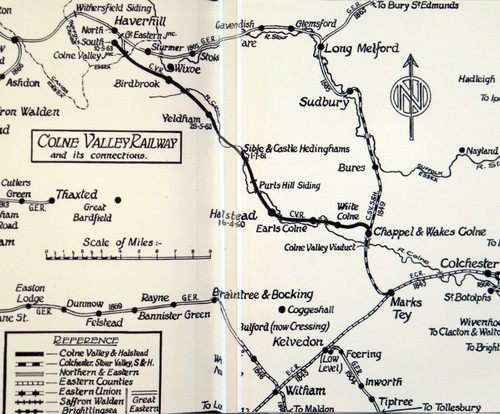 In 1855 the first discussions took place relating to the creation of a railway between Chappel and Halstead. The initial section of line was completed in 1860 and continued to operate until April 1965 having provided one hundred and five years of continual service carrying goods and passengers through the Colne valley.

The impact of the railway can still be seen in many places along it’s route including buildings, bridge sites, embankments and cuttings. If you are of a mind to spend some time looking at “Google Maps”, or a similar resource, it is still possible to trace the route of the line from Chappel all the way to the outskirts of Haverhill.

During its time the railway played an important role distributing products from the Colne Valley for eventual delivery in all parts of the world. Items carried included bricks from The Langthorne Brick Works and The Highfield Brickworks, Sible Hedingham, products from Rippers Joinery, Sible Hedingham, earth moving and agricultural equipment from Whitlock Brothers of Great Yeldham, Textiles from Courtaulds, Tortoise stoves, ovens etc. from Charles Portway & Sons in Halstead and agricultural equipment from Hunts of Earls Colne.
Many will recall day trips to the seaside from Halstead station where the trains were crowded with excited children, sandwiches packed ready to explore the exciting destinations of Clacton and Walton.

Timeline, key dates in the history of the Colne Valley & Halstead Railway 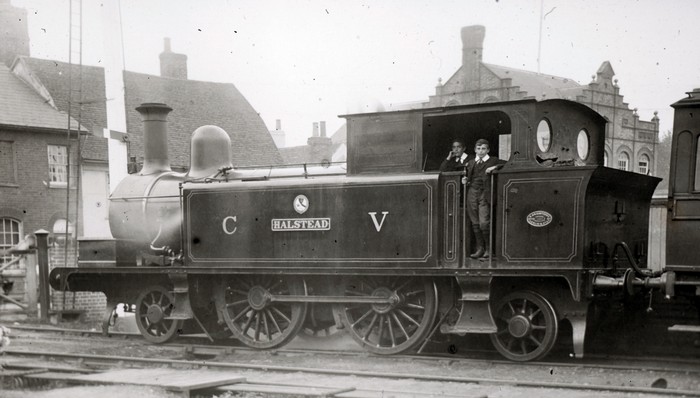 The "Halstead" at Halstead station on route to Haverhill 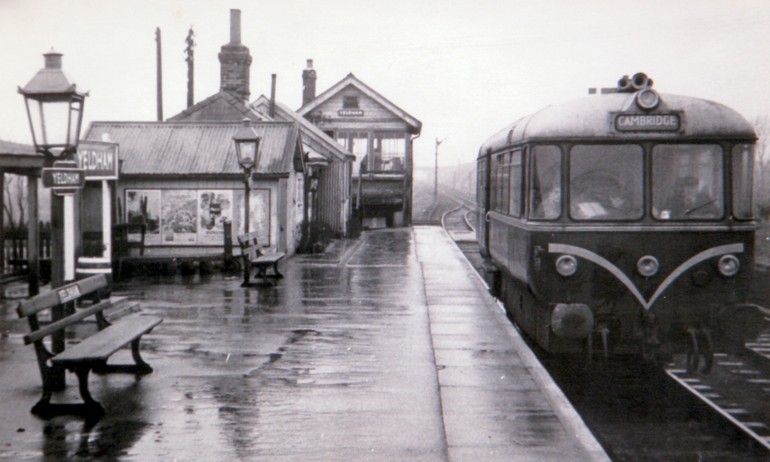 A rail bus at Yeldham station during the final months of passenger train operation
The story since closure
In 1973 two railway enthusiasts, Dick Hymas and Gordon Warren, had a vision to create a working railway between Castle Hedingham and Great Yeldham. A long-term lease was eventually acquired on a section of the former trackbed and in 1974 the Colne Valley Railway Preservation Society (CVRPS) was formed. During its days of operation there were no buildings on this site so everything needed to be created from scratch. Fortunately the society was able to obtain the old Sible & Castle Hedingham station building which remained intact within the Rippers Joinery works site. The building was dismantled brick by brick, transported to the new site and re-built to form the heart of the new attraction. 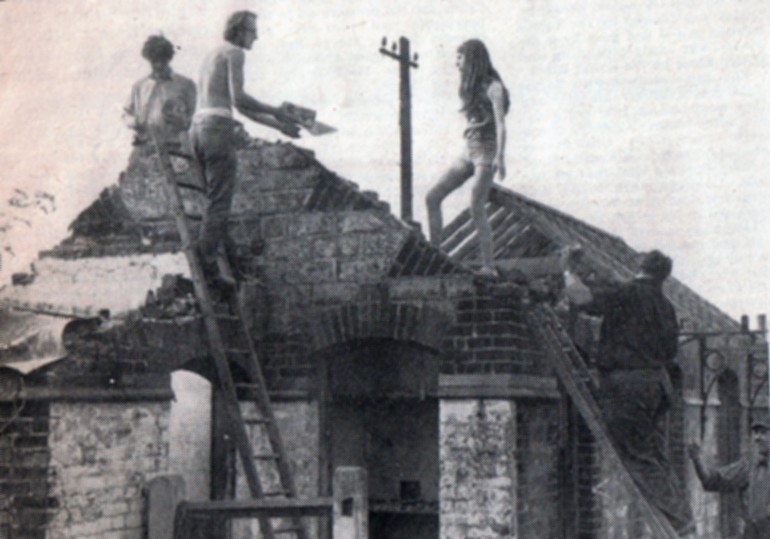 Volunteers dismantling the Sible & Castle Hedingham station building
As you can see from the above picture, health and safety was not taken quite so seriously back in the 1970’s! I worked on this project for a while and recall some fairly hot and dusty weekends spent painstakingly taking the building apart brick by brick. 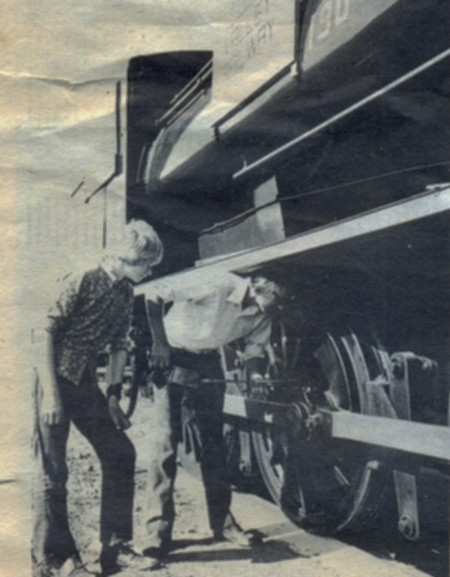 Here I am (Andy Harris) with Dick Hymas posing for the Gazette in 1974
The site was further developed over the years to become a major tourist attraction and centre for conservation and education. The track was extended to a mile in length following the addition of a bridge across the river Colne. This bridge was the only remaining example which had been retained by the water board to enable access to one it’s sites, the preservation society were given the bridge in return for providing a replacement footbridge.

In 2004 Dick Hymas announced that he was considering selling the operation and offered the Colne Valley Preservation Society the opportunity to purchase it. The Colne Valley and Halstead Railway Trust chaired by Jeremy Dunn was set up to secure funds to buy the railway but, despite having secured a Lottery grant of nearly £1m, they missed two deadlines to complete the purchase and the railway was sold to a private Australian buyer in 2006.

The railway continued on a leasehold basis and during 2014 the Australian company that owned the land on which the Colne Valley Railway operates announced that it wanted to sell it and gave the preservation society a year to secure funds to complete the purchase.
In March 2015 it was reported by the local press that the owner of the land had decided that they were no longer interested in selling to the railway preservation society. The report stated that the landowners agent had put forward development proposals for the site including housing, businesses a shop and cafe as part of Braintree Council’s call for land in the area. This was a shock to the preservation society which announced that it intended to operate as normal until the end of the 2015 season and would be looking for a new site from which to continue.
In July 2015 further reports were published stating that the land owner had once again given the preservation society the option to purchase the land and granted a one year extension to the existing lease.
In December 2016 it was annonced that The Colne Valley Railway Preservation Society had received a grant of £1,757,200 from the Heritage Lottery Fund (HLF) providing long term sustainability for the Colne Valley Railway (CVR) including the provision a new entrance and building which includes visitor facilities together with the development of two important centres on the CVR’s main site. Following the announcement Nick Ellis, the railway's Collections Manager, said; 'not only will this grant from the HLF allow us to tell the story of the Railway and the local community through an innovative approach combining an on-site museum and web presence, we have now gained ownership of the site which allows us to work toward becoming an accredited museum'.
The Halstead & District Local History Society have been able to loan a number of Colne Valley and Halstead Railway artefacts to the Colne Valley Railway Preservation Trust. 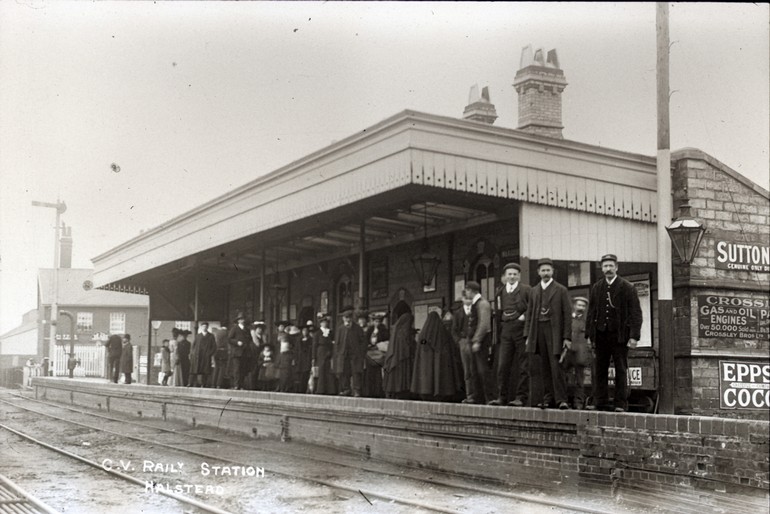 Waiting for the next train at Halstead station
The dates used in the timeline within this article have been taken from “From Construction to Destruction. An authentic history of the Colne Valley and Halstead Railway” by Edward P. Willingham. This detailed book is available to buy in our museum, through the website or via your local library.
Also recommended is “Colne Valley & Halstead Railway Through Time” by Andy T. Wallis, this book is widely available in bookshops and online or via your local library.
Andy Harris
Halstead & District Local History Society
Back to content